My first sour of many to come.

There have been a lot of really flavorful beers coming out of the SW Michigan area lately. Specifically I've really enjoyed many of the Odd Side "Fruitsicle" series beers as well as the HOMES "Sherbert" series of beers. I live an hour (or more) away from either of these places so I'm rarely able to get some of the better releases. Taking that to heart I decided that I would just make my own!

Enter my first attempt (and a successful one at that) at a lactose kettle sour.

My goal here was to make a rich, flavorful, full bodied beer that when carbed represented the way that sherbert sort of "bubbles away" on your mouth and leaves you with a delicious flavor. I think I succeeded.

These numbers are from bru'n water. I originally went for a "Yellow Full" profile but then ended up with this. I can't remember why, it may have been based off a berlinner weisse profile I found somewhere else.

I followed the mash steps above and hit my numbers pretty much spot on in terms of pH and amount of sweet wort. I took my 6.5 gallons and pre soured it down to around 4.4pH with lactic acid. I didn't record how much it took but iirc it was around 8-9ml.

After pre souring I added half of a carton of goodbelly mango and wrapped the lid of my kettle with saran wrap. I then lifted part of the wrap and blew CO2 into the headspace for around 30 seconds. I understand the CO2 will intermingle with the O2 in the headspace but my goal was to at least disperse some of it. This part is debatable as I understand, but I do a lot of things for insurance whether it's necessary or not.

I came back to the wort 23 hours later and found the pH to be 3.5. This is around where I was hoping for. As I was using black currant concentrate I anticipated the pH to drop a bit more when I added it in. Or at least the perceived tartness to be there. I had used 16oz of the same concentrate before on a hard cider so I had an idea of what the flavor and tartness would be like.

Being satisfied with 3.5pH I brought the wort up to boiling temps and continued my boil schedule as normal.

When done, I chilled the wort to 65F, oxygenated with pure O2 for about 20 seconds, and pitched a single pack of US-05 without rehydrating.

A week later I took a gravity reading and did hit my intended gravity, just a touch low at 1.016. I added the concentrate and took another reading and it showed 1.020 with that added. I debated on whether I wanted to let the sugars ferment out or not but in the end decided that I was impatient and went on to keg it. I added .5 tsp of potassium metabisulfite (campden) and 2.5 tsp of potassium sorbate to the beer and gently stirred it into solution. These measurements are per the Brulosophy sparkling hard cider recipe which I'm a fan of and it seems to work well.

I kegged and force carbed to around 3 volumes of CO2 and found that to be very pleasant. The end result is what you see above!

The aroma is full of currant and that sort of "milky vanilla" aroma that lactose adds. It's like a sweet chalk if that makes any sense, I find it really works with the fruit though. It gives the perception that you're about to drink something thicker with some body. Tasting the beer, the body really is there. That was the goal of the lactose and a whole pound of torrified wheat in a tiny base malt batch. The tartness is perfect, it's not overbearing at all and it's easy to down a whole glass in just a few minutes if you so felt the need...

I actually really enjoyed this beer uncarbonated as well, even when taking samples before kegging it was incredibly refreshing and went down easy.

Let me know if you have any questions! 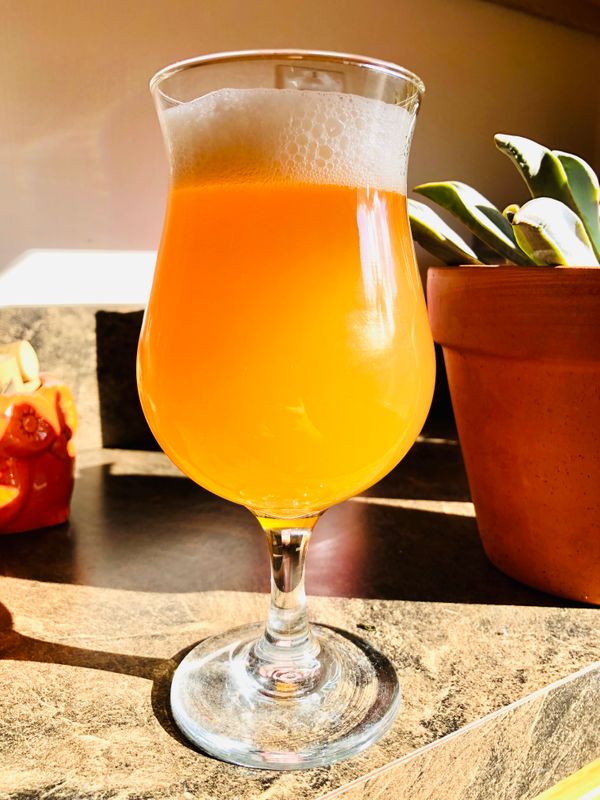 Good morning all! I wanted to take some time and share my first attempt at a Boss Tweed clone in preparation for the upcoming release by Old Nation Brewing Co. First, I’d